‘One step forward, two steps back’ — this is the best way I can describe whats it’s felt like over the three weeks we’ve spent in Valencia. There was a sizeable list of jobs that we needed to get done before we could even contemplate sailing.

The boat was booked in to be taken out of the water a few days after we arrived, which after a little bit of a kerfuffle did happen successfully. This was quite something to watch as they winched the boat out the water and affixed it to a stand on the hard. We had a nice covering of barnacles on the hull which needed to be scrapped off and jet washed clean. Following this we copper coated and anti-fouled the boat, this is a protective layer that helps prevent barnacle growth over the hull, keel and propeller. The primary reason for removing the boat from the water was to have the old transducer (a speed and depth sensor) hole filled in. It was a surprisingly large hole, so to know it was filled in was a relief. 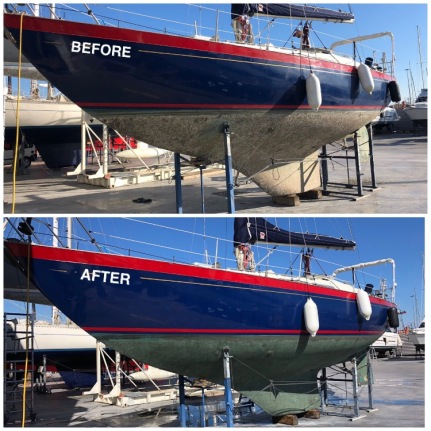 The engine is the original one that was in the boat when it was made in 1983, so it’s doing pretty well. However, it would only start occasionally, which posed a large issue; without a reliable engine we would be unsafe to set sail. The four boat batteries had all been replaced as well as a new starter motor, which should have solved the problem. The mechanic was called and after extensive investigation in situ and in the warehouse only a minor fault in the wiring connections was found. Fortunately a simple fix and a fully functioning engine! 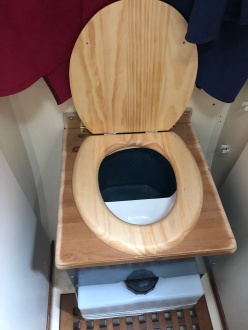 The next major work that needed to be done was replacing the toilet. Andrew (Sam’s Dad) came out to help as he had built a compositing toilet. Ripping the old toilet out was quite a job, with some slightly unpleasant discoveries. As beautiful as the hand crafted wooden toilet seat looked, below it is just two buckets… that is the extent of our toilet on board.

After a couple of days of unbelievably heavy rainfall, we’d discovered the boat had sprung a number of leaks; the largest being through the window above the dry food cupboard in the kitchen. To prevent further leaks through this window Sam and I decided to remove it, scrape off the old sealant and re seal it before fixing the window back in. This was quite a job and Sam decided that the best time to do it would be just before more rain was forecast. Since however, we have not had any leakage in this particular spot. A myriad of leaks across the boat have also now been seen too. 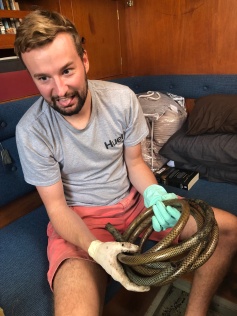 Changing the extremely old water pump (which moves water from the tank to the sink) seemed to be a task that was simple, yet we discovered that the hoses were disgusting. We had to remove the existing pump, decided that it would be best to replace all the piping between the tank and the sink and then install the new pump. After multiple trips to the chandlery (a shop selling all things boating) we successfully got it up and running within the day.

Andrew had ordered a new spray hood and bimini to be measured, made and fitted prior to our arrival; however the Spanish work at snails place and hadn’t fitted either piece. A spray hood and bimini cover parts of the cockpit giving shade or protection from the rain when required; having both these things would be important to our comfort on board. When they came to fit them they were far too large for the boat and had to be cut down, as well as other installations that had to be considered. After a lot of back and forth between the boat and the warehouse, with communication a little tricky, we eventually had both pieces fitted and they look great on North Star. 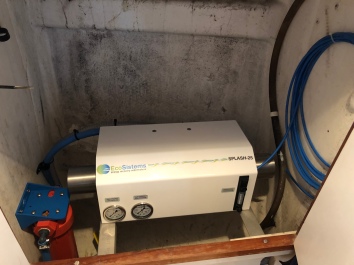 Our newly purchased water maker was the next thing we needed to get fitted. This is a clever bit of kit that will turn sea water into drinking water, making 25 litres of drinking water per hour; for long passages this will allows us to top our water stores. With our composting toilet we no longer needed the toilet sea cock (a ‘switch’ where sea water can be allowed to enter the boat) so this was altered to become the intake for the water maker. The output needed two options, one to fill our on board water tank and the other straight into drinking water bottles. Once this piping was done the machine needed to be wired into the boat. The existing cable size and ampage the switch could manage weren’t correct, so this needed to be completely replaced. Eventually everything was in place and the water maker was up and running.

On board we have a wind generator (to charge batteries using the wind) and an electric bilge pump (to remove excess water in the boat) alongside other parts that need to be fitted. Yet, after three weeks in Valencia we decided that we had reached a point where we would not progress further and so it was time to set sail.

One thought on “Improvements and new parts”