As we pulled out of our berth in Gibraltar to sail to the Canary Islands we waved goodbye to a place that we had grown strangely fond of. We’d made friends and it was like home away from home, just with better weather. Excitement was pulsating through the boat as we exited the harbour walls, for the next 7 days it would just be the three of us (Sam, Andrew and I) onboard North Star in the Atlantic ocean.

A lack of wind wasn’t forecasted and it would have hampered our progress if it had not been for our new engine. Over the first 24 hours at sea it chugged along beautifully allowing us to make some good progress. The Gibraltar straight was flat as a mill pond, with little shipping making our exit even easier. We hugged the coastline of Morocco for the first afternoon so we could stream the England vs Wales rugby game. Despite the loss, spirits were high, we changed course and lost sight of land for the next six days. 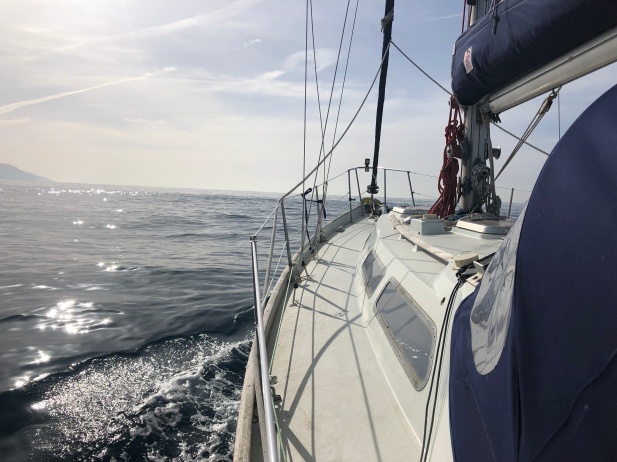 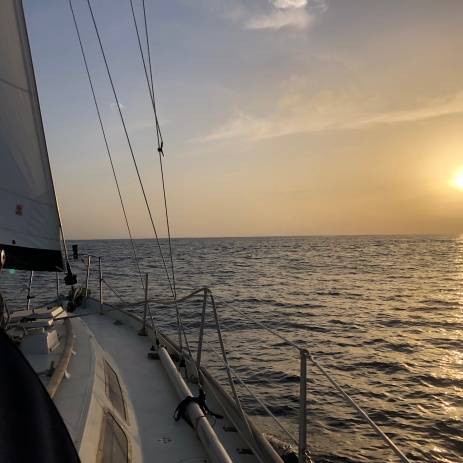 On our second morning at sea a pod of dolphins came to play with the boat. Apart from a short sighting in the Mediterranean I had never seen dolphins in the wild and it was mesmerising. That same afternoon we saw a pod of whales pass by our stern, we assumed pilot whales but couldn’t be sure. That night on watch Sam was admiring the phosphorescence created by the wake of the boat when he spotted a streak of light darting towards him. Unaware of what it was he ushered me up to the cockpit to investigate. We realised that there was a pod of dolphins swimming around the boat creating trails of light through the phosphorescence. This was the most magical thing Sam and I have ever seen, the streaks of turquoise zipping around the boat just blew us away. There is no video or photo that will ever do this sighting justice and that is what makes this experience so unique and special. 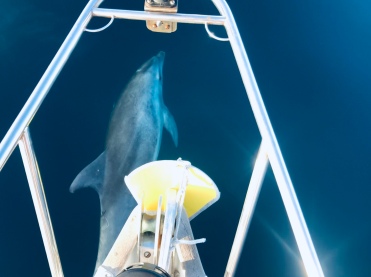 After nearly thirty hours of no wind a breeze started, we hoisted the cruising shute and we were moving along nicely. As evening came it started to really pick up; for everyones safety we needed to get the cruising shute down and this meant Sam and Andrew had to go up onto the foredeck whilst I was on the helm. At one moment a huge gust came through and I thought Sam was going to go flying up the sail as he desperately tried to lower it onto the deck. Fortunately we all survived unscathed and the rest of the night went without a hitch. 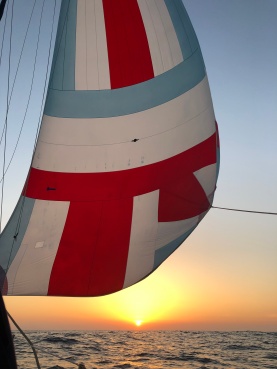 After three days and nights at sea we really started to get into a routine. Reading books, taking in our surroundings, playing games and chatting to pass the time. Endless changes and tweaks to the sails also add to the fun. With no shower, and not enough water on board to have one anyway I decided to have a makeshift shower in the form of a bucket and sea water up on the foredeck. Surprisingly, this was a very effective method and allowed me to wash my hair leaving me feeling revived.

Throughout our time at sea we trawled a fishing line; finally on day five we finally caught a tuna. This was the first time catching something with our new rod and it meant we had a delicious dinner in store for us. You certainly will never eat anything fresher than a fish you caught mere hours before cooking it.

On our final day at sea we had an incredible experience with a large pod of dolphins. They were surfing the waves alongside the boat as well as showing off, jumping out the water and slapping the water with their tails. It is incredible how many hours you can be entertained watching these elegant animals playing. 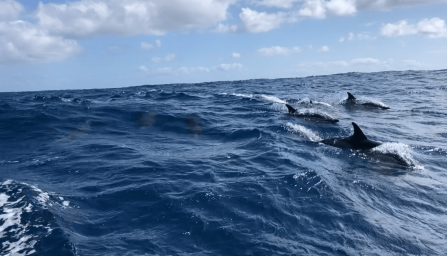 The wind fluctuated between nothing and 25 knots over the time we were at sea allowing us to test different sail set ups. Predominantly we had a cruising shute up which is perfect in light winds, however it is an old sail and ripped so we had to patch it up twice whilst we were at sea. Other times we had the genoa poled out and the main sheet on the opposite side, goose winging down wind. When the wind really gave up on us we turned to our trusty new engine. On our final night before reaching Lanzarote there was such favourable wind that we had to almost drop all our sails to slow us down enough so we didn’t arrive in the middle of the night. We pulled into Marina Rubicon in Lanzarote at 9 o’clock in the morning. We refuelled the boat and moored up, ready for resting up and looking forward to whats to come.

I immensely enjoyed the passage; I had concerns with the stripping back of luxuries, lack of my phone and the cabin fever I thought I might experience. However, not one of these affected me. A lack of luxury has made me appreciate what is important. It didn’t phase me in the slightest that I had to shower with a bucket, washing my hair by dunking my head into cold salt water. The cooking is something I enjoy, despite its challenges. Food becomes a focal point of the day on board, it brings the crew together and is something to look forward too. The lack of my phone has been refreshing, although I miss being able to contact my family and friends as and when I want too. At no point have I felt cramped or uncomfortable being on board North Star, in fact it’s come far more naturally than anyone expected. I’m now eager and full of excited anticipation for our Atlantic crossing after spending some time in the Canary Islands.

3 thoughts on “The first taste of the Atlantic”