After long discussions we decided to go via the Cape Verde Islands instead of crossing the Atlantic straight from the Canary Islands. And what a mistake it would have been not to have visited these beautiful islands.

We spent ten days in Mindelo, the main city on the island of Saint Vincente. Initially after spending a week at sea the respite the marina gave us was very welcome. We fixed what we could on board, primarily we had to refit Marvin to the helm so he was fully functional again. Further more we did a stock take of spare ropes and purchased more incase of issues further down the line. What we could not repair ourselves we tried to arrange for someone else to repair. However, ‘cape verdian time’ and a language barrier certainly made this quite the task. Sam wanted a small bit of fibreglass work to cover the four tiny holes we had found in the stern cockpit locker. After four different work men had come to look at the job and a lot of translation later we thought we had found our guy. However, the job we required clearly hadn’t been translated correctly with the guy taking an angle grinder to our boat and looking like he was about to gauge a big hole in our stern. Eventually we managed to steer him in the right direction and a job, of sorts, was completed.

It was great that my Dad flew out from the UK to join us for a few days. We took this opportunity to have a few days off from working on the boat and to explore Mindelo.

We spent a morning wandering around the markets; the fish market was our first stop which was quite the experience. In a large hall there were dozens of stalls full of fish. The men would be on the boats delivering their catches to the pier at the back of the market hall, whilst the women would be on the stalls selling the fish. If the men weren’t delivering fish however they were gutting them. Despite the smell, the atmosphere and sights really were incredible. The variety of fish was vast and it was exciting being part of the atmosphere.

Next we wandered to the main market square. Here there were a whole variety of different fruit and vegetables being sold. I attempted to barter for some bananas in very poor style and we probably got ripped off, but they were beautifully sweet. The markets were an experience for our senses with the vibrant colours of the produce and the smells. 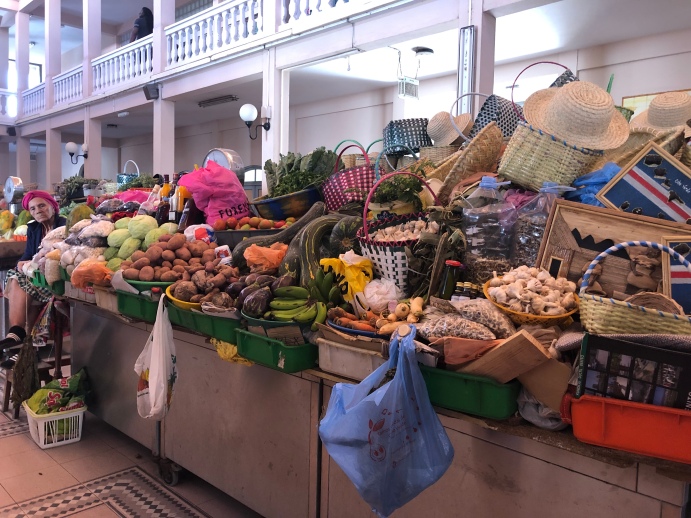 As you wandered the streets of Mindelo, behind doors that seemed to lead to no where you would in fact find little stores selling a variety of nuts and seeds alongside other produce. When it came to stocking up the boat for our crossing we utilised, as far as possible, what the markets had to offer. However this, as you will see in the next blog, led to a few issues. 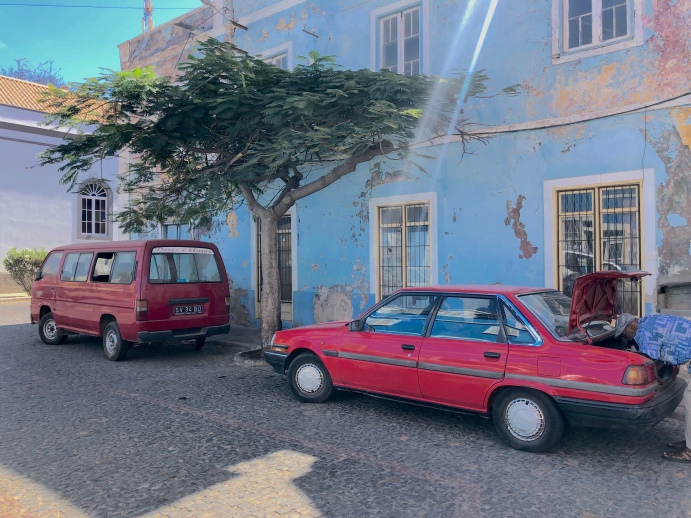 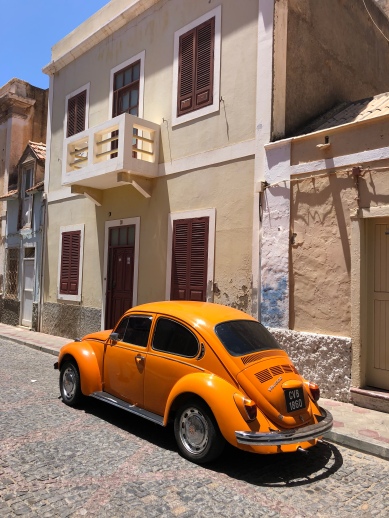 The food served in restaurants certainly reflected the luscious choice of fresh goods. The food was not very expensive and the tastes were sensational. The main diet here is predominately fish but if you pick the right place the choice of meat was exceptional. Sam and Olivier had the Cape Verdian national dish on multiple occasions. This is a dish called Cachupa and is an assortment of beans, served with a variety of toppings such as chorizo and egg. The octopus was another of our favourites.

Following many recommendations we booked a day tour of Santo Antao, the large island opposite Sainte Vincente. This is a much higher island with its two sides looking markedly different. The western side catches the rain and is luscious in contrast to a barren eastern side, which also protects Sainte Vincente from rainfall. There is one road through the island which climbs up the harsh, dusty side of the ridge. Once you reach the top you have the most amazing views down over the island. The road then continues down towards the sea winding through the most extraordinary landscape. A large amount of the agriculture takes place in the volcano caldera which catches the clouds and spending some time watching the ever changing cloud formations in it was incredible. 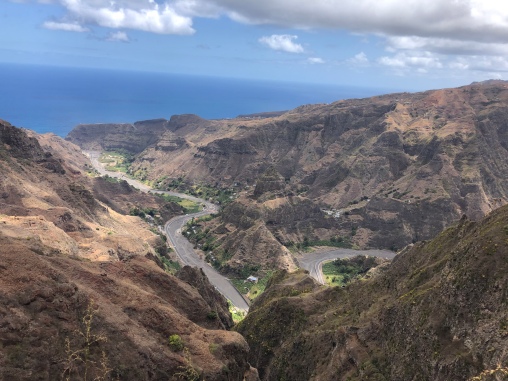 Once you reached the coastline again you visited the most gorgeous and quaint fishing village. You could sit there for hours watching the fishermen navigate the tiny gap in the rocks to enter the bay and unloading their fish. To see how much their catches were worth they weighed them on old style scales that you had to balance with weights to the piles of fish.

Next up was the sugarcane ‘factory’ that produced its own alcoholic drink named Grogue. This is very potent and something I certainly did not take too, however the boys very much enjoyed more than their fair share. It was a fabulous day out and one we were very glad we did. 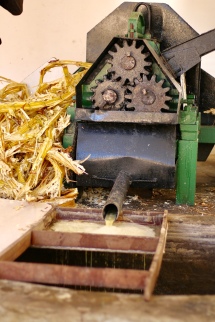 Our final day in Mindelo was spent preparing the boat, and ourselves for the huge task we are about to undertake… crossing the Atlantic.