After arriving into St Lucia we spent the first week in Rodney Bay Marina so we could get ourselves sorted, our body clocks back to usual and a mound of washing done. We filled our bellies with full english breakfasts, pizza, hamburgers, beer and rum punch. After multiple showers and a few good nights sleep we were ready to explore what St Lucia had to offer.

We attempted to hire a car from the company in the marina, however they didn’t have any so they called in a friend. He turned up with a car, gave us the keys and said see you in three days; possibly the most unofficial car hire ever. Out we headed onto the St Lucian roads, this was fairly easy as they drive on the same side of the road as we do in the UK. However, they don’t waste anytime when there’s a hill in the way, the roads are straight up and down and invariably at terrifying angles. 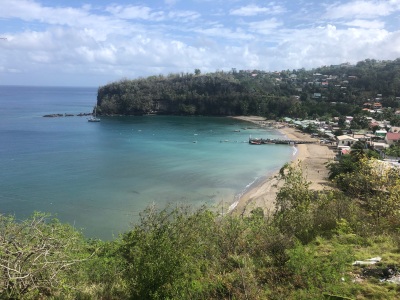 Sam and Olivier were very keen to find some waterfalls. We headed to the West coast of St Lucia to a little fishing village called Dennery where Sault waterfall was close by. A long drive down a fairly unofficial road and a short hike lead you to a lovely little waterfall with a small knee deep pool. The boys found soap and bathed in the fresh cool water of the falls. 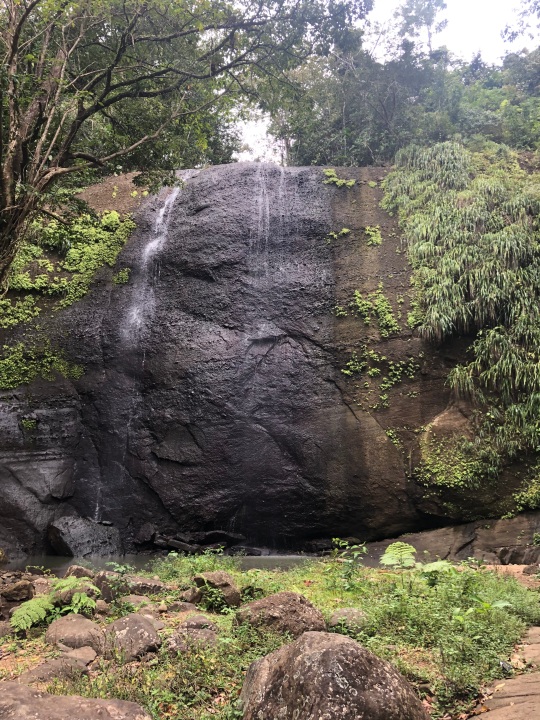 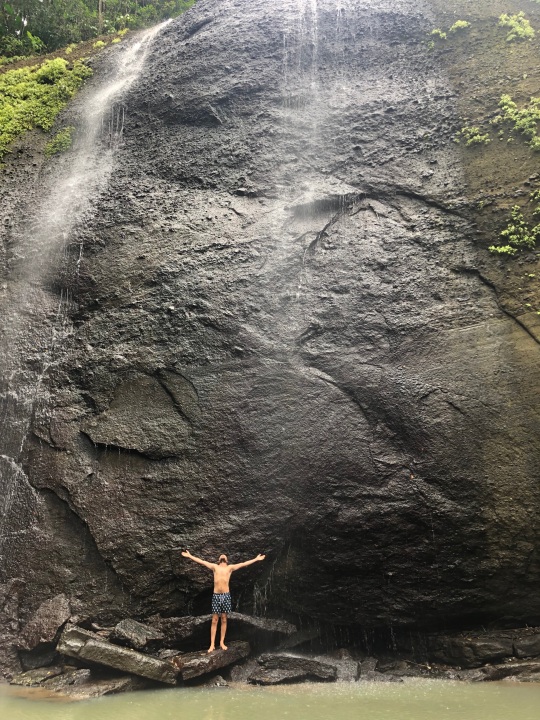 The next day we headed to the 2 pitons in the South of St Lucia. After 2 hours winding along the coastal road with beautiful views we arrived at the Gros piton (the larger of the two). However, much to our disappointment the cost of climbing the piton was $50 USD per person which wasn’t something we could all afford. Instead we went wandering to a deserted beach, which was a lot of fun and probably more interesting than being guided up the piton. We found a wild growing pineapple, which taught us all something new as well as lots of coconuts and almonds on the beach. Dogs and chickens also seem to frequent the beach. 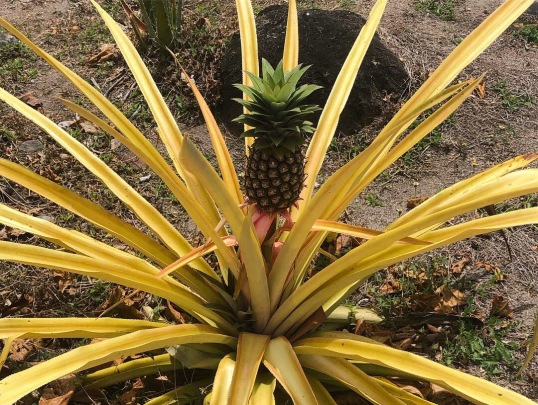 Next on the agenda was visiting the drive in volcano and sulphur springs. With bubbling sulphur pools the caldera of the volcano was awesome to see, if a bit smelly. There was a nice informative museum as well telling us more about how the pitons were formed. You could cover yourself in the nutrient rich mud and then bathe in the naturally hot baths which was a lot of fun. Whilst in the area we also visited the Hotel Chocolat factory and had a chocolate based drink. The view of the piton from their restaurant was absolutely breathtaking and it was a lovely place to sit and enjoy the afternoon sun.

We utilised having the car and re provisioned the boat after we had eaten a large amount of our stock during the crossing. Food does seem to be expensive over here as most things are imported, we assume. However, it certainly makes you realise how lucky and spoilt for choice we are in the UK. We managed to return the car without any issues which was a slight relief after our fairly dodgy deal.

Inevitably we had issues on board that we needed to see too before we could leave the marina. Our fridge decided not to work properly with the compressor working overtime to try and keep it cool. We needed to inflate our dingy, buy a lock and an outboard. I frantically phoned and emailed people to organise getting our oven replaced. Eventually we managed to get everything sorted that we needed, however the oven wouldn’t arrive for another month.

On Friday nights, Gros Islet (the small village down the road from the marina) has a jump up street party. This was a lot of fun and we ended up going three times during our two visits to St Lucia. Duke’s place was the place to be for food, they had huge BBQ’s out the front with a wide range of fish. Sam and I tried Blue Malin and Mahi Mahi over the times we went, with Blue Malin being our favourite. With your fish you get the most fabulous garlic sauce, rice and bread along with hot sauce on the side. Add some extremely strong rum punches into the mix and you’ve got yourself a fun night. The streets are lined with little stalls selling food and drinks. At the main junction there is a huge set of speakers and everyone gets involved. It’s certainly a very fun night out.

We anchored in Rodney bay when we were not in the marina, mainly right next to Pigeon Island (one of the headlands of the bay). This was a lovely spot and allowed for us to snorkel off the boat. It also meant we could explore pigeon island and at the highest point the view down south over St Lucia was brilliant.

On our second visit to St Lucia at the end of May we returned to Rodney Bay Marina where we were due to pick up our replacement oven. However, upon picking it up we realised it was the wrong model and therefore would not fit into the space we have. This was very disappointing and leaves us in a position with no oven for the remainder of our time cruising in the Caribbean. Fortunately we have managed to organise the correct replacement to be sent to Grenada where the boat will be hauled out for hurricane season so will be ready on Sam’s return.

We completed some jobs on board and did a thorough clean of North Star. We needed to refill our water tanks and fully charge the batteries as this was the first time in just over a month that we hadn’t been at anchor. Fresh water showers were also a welcome luxury! We managed to catch both the Europa and Champions League finals as both the teams we support were in one or the other. There was quite the football following which meant there was a real atmosphere for both games.

We then moved to Marigot bay which is a lovely bay enclosed by mangroves, with a little beach spit jutting out. We decided to pick up a mooring ball here as it meant you could use the resort facilities. We had access to two pools as well as a bar in one of them. This really was a bit of luxury, we got sun beds to lie on and fresh towels. We were served fresh coconuts and nibbles throughout the day whilst lounging in the sun. We had an amazing time lazing around and enjoying the wonderful surroundings before moving on to our next island.